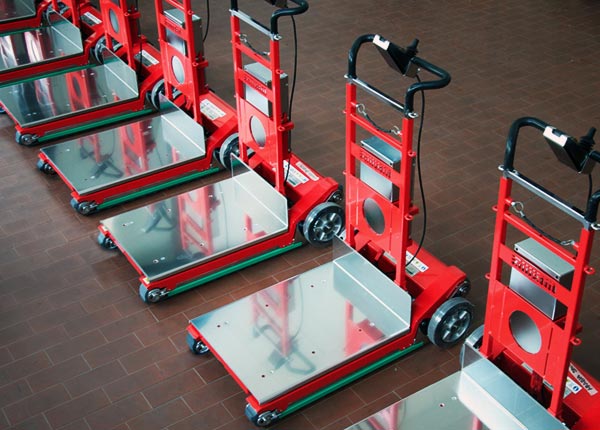 Zonzini produces four models of electric stair climbers. They are innovative, safe and suitable for transporting light and heavy goods, such as:

The choice of the right stair climbing hand truck, whether with wheels or with tracks, depends not only on the weight, but also on the goods you have to carry on the stairs.

For example, windows and doors should be carried on the stairs in a position parallel to the ground. This is also important when you have to pass through a door. For example, to enter an apartment or a room.

It is obvious that your body strength is not sufficient to carry 800 lbs of heavy goods up a ladder. In addition to electric motorisation, there are other aspects that come into play when transporting heavy goods on staircases. The most important of these is safety.

If, for example, you need to carry heavy furniture up stairs, it is crucial that the load remains stable while being transported. If the item of furniture tips over, not only could it break, but you could also seriously hurt yourself. In addition, you could ruin the staircase, which might be made of wood or a previous material such as marble.

In this article you will find useful information about the difference between wheeled and tracked stair climbers.

Stable and safe, designed for all types of stairs. Zonzini’s Domino stair-climbing robot was awarded a prize at the 2016 Safety & Health Expo in London in 2016. It is one of the most versatile stair climbing hand trucks on the market, and is suitable for transporting all types of goods.

Domino is equipped with independent tracks thanks to its dual electric motors. This means it can make full 360-degree rotations on a stair landing. Thanks to its innovative steering system – it is controlled by a simple joystick – a single operator can carry heavy goods weighing over 880 pounds.

The Domino stair-climbing robot is equipped with a sophisticated electronic device that allows it to tilt the load automatically according to the inclination of the staircase.

The new version of the Skipper electric tracked stair climbing hand truck was released in 2020. The new Skipper is designed to allow for the transportation of goods over 80 inches long on stairs.

It is the ideal truck for effortlessly transporting doors and windows on any type of stairs, iIncluding helical staircases.

Another great advantage of the Skipper over many of the other stair climbers on the market is that you can transport goods directly from the van without having to use a ramp.

Like the Domino stair climbing robot, the Skipper also allows a single operator to transport cargo in excess of 880 pounds. It is controlled with a latest-generation joystick. Its maneuverability is exceptional. It can change direction, adjust speed on the stairs and perform 360⁰ rotations.

The Skipper is the only electric stair climber officially approved by London Underground. It is safe and stable even on escalators. It allows goods to be transported parallel to the ground.

If you need to transport medium-weight cargo and need a powerful yet lightweight stair climber, the Buddy and Buddy Lift electric stair climbing dollies are perfect for you.

They are very compact, so you can use them on very narrow staircases, including spiral staircases. They can climb steps over 10 inches high.

The wheels are made of a special non-marking rubber mixture, which avoids damage to the stairs. You can even use them on stairs made of delicate types of wood.

The special feet automatically position themselves when going both up and down steps. The electric engine allows you to safely transport heavy goods weighing over 350 pounds.

A wheeled dolly for stairs should never be used to transport heavy goods.

The reason for this is that it does not offer the load stability on stairs that can only be achieved with tracks. This is why these stair climbers are the ideal solution for transporting household appliances, such as washing machines or refrigerators, on stairs.